Written By:
Scott Thompson
Published On: September 14, 2022
Reading Time:
6 Minutes
Filed Under:
Fashion Facts
Did you know that the Scottish kilt was actually designed by an Englishman? 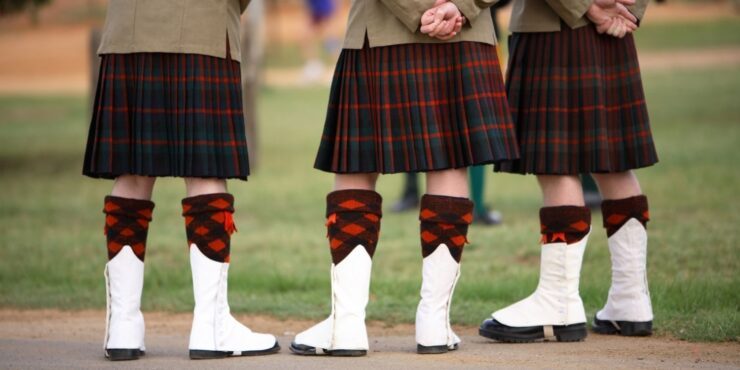 Originating from high up in the Scottish Highlands, the kilt is a men’s and boy’s knee-length skirt.

The kilt has been used by Scots as far back as the 16th century.

This may be a little “below the belt,” but did you know the modern Scottish kilt as we know it today wasn’t actually designed by a Scotsman?

Keep on reading as we unravel the history of the Scottish kilt. 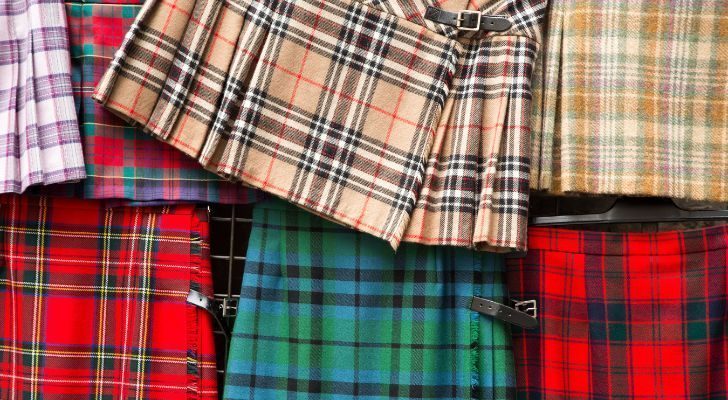 The 16th century saw the introduction of the kilt, but back then, it was known as The Great Kilt, or in Scottish Gaelic “filleadh mòr,” which is pronounced fe-ley-mor.

The Great Kilt covered the whole body with the top half over the shoulders and dropped right down to the knees.

These fantastic garments kept clans up in the brutal cold Highlands warm, whatever the weather.

The wools and dyes were collected from local ingredients, including plants, lichens, fruits, and roots.

Depending on where the groups lived, the same group would have similar color kilts with some variation depending on the year’s seasons and what natural resources were available.

A sweaty and brutal affair. 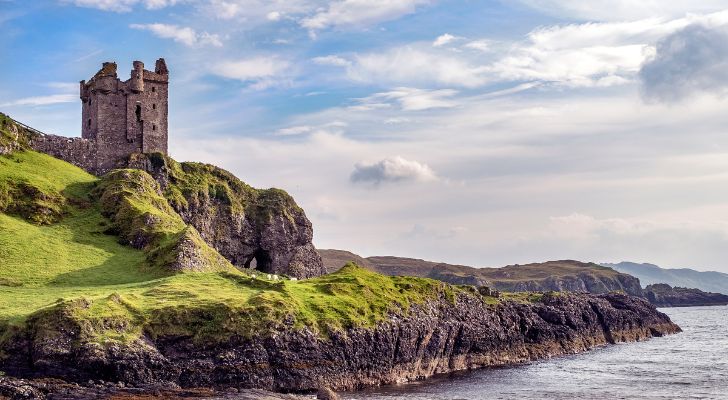 You’d think the kilt would be welcomed in Scotland as it was far north of the equator, but that wasn’t always the case.

In 1544, Clan McDonald and Clan Fraser went to battle in the Great Glen on the northern end of Loch Lochy.

This battle is famously known as “Tha Battle of the Shirts.” And that, my friends, is because they were so hot under their kilts they ripped them off right down to their shirts.

Of all 900 battlers, only 13 survived, giving us an eye-opening glimpse into how brutal these clan battles were.

Clan Fraser was victorious and won the battle by taking Castle Tioram. The ruins of this castle are still there today.

They were closed to the public in 1998 due to it being in deplorable condition.

Restorations were to take place from 1997, but this never went ahead.

Introduction of the small kilt. 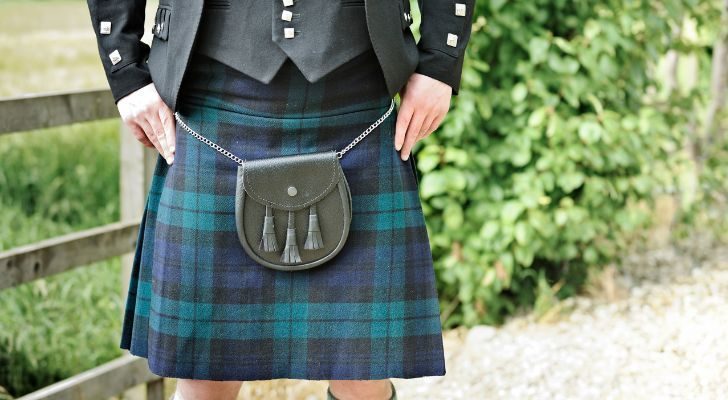 Let’s skip forward a little to the 18th century.

You might be surprised to find the idea behind the shorter-length kilt as we know it today did not originate in Scotland!

The idea actually came from an English Quaker called Thomas Rawlinson from Lancashire back in the 1720s.

Rawlinson thought the Great Kilt was too much, and he decided to split the garment and create one distinct piece running from the waist to the middle knee.

Low and behold, the small kilt or in Gaelic “filleadh beag,” pronounced “fe-ley-beg,” was born.

Rowlinson started wearing the small kilt, and so did some of his peers.

Before long, it was adopted by the Highlanders and even some Lowlanders.

The kilt was almost lost in history books. 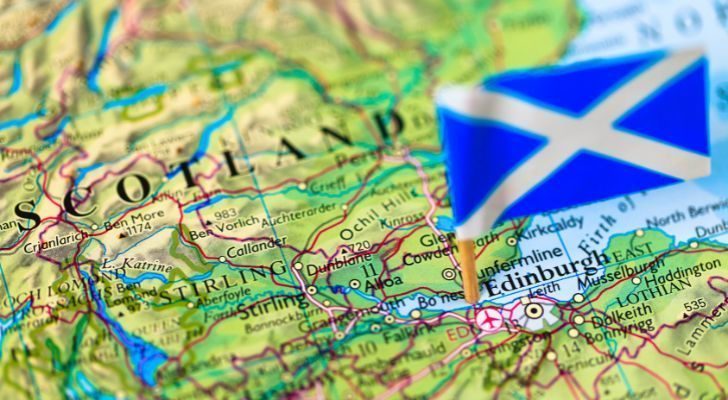 The act made it illegal to wear the “Highland dress,” which included the kilt.

The ban came to bring Scottish clans under the control of the government,

The only exception of it being worn is within the army.

As Scots kissed goodbye to their kilts, the law wasn’t repealed until July 1, 1782. The proclamation was released both in English and Gaelic, and it read:

“Listen, Men. This is bringing before all the Sons of the Gael, the King and Parliament of Britain have forever abolished the act against the Highland Dress; which came down to the Clans from the beginning of the world to the year 1746. This must bring great joy to every Highland Heart. You are no longer bound down to the unmanly dress of the Lowlander. This is declaring to every Man, young and old, simple and gentle, that they may after this put on and wear the Truis, the Little Kilt, the Coat, and the Striped Hose, as also the Belted Plaid, without fear of the Law of the Realm or the spite of the enemies.”

At that time, the kilt wasn’t commonly worn anymore.

Thankfully, several groups started promoting “the general use of the ancient Highland dress.”

Slowly but surely, the kilt made a grand return.

It’s interesting to think that the kilt was almost erased from history forever.

The kilt’s modern design and construction. 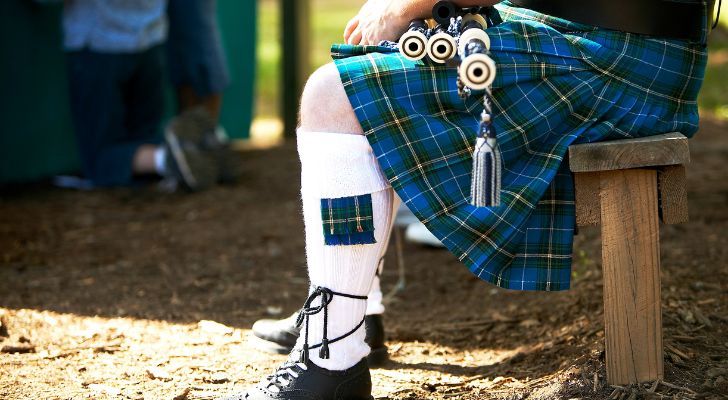 The Scottish kilt is bold, unique, and unmatched by other garments.

The kilt goes down from the hip to the middle of the knee.

And for all those curious, yes, the true Scotsman will not be wearing anything underneath.

Although in some instances, the Scottish Tartans Authority suggests not wearing anything underneath can be indecent.

Sports activities are an example of a good time to wear something under your kilt.

Even tennis player Andy Murray admitted to wearing underwear under his.

Interestingly, according to YouGov, around 55% of those who wear kilts do indeed wear underwear underneath.

Moving swiftly on, the modern-day kilt is made of twill-woven worsted wool.

Historically, specific patterns were associated with different clans and families.

It wasn’t until the Victorian era that specific patterns were systemically recorded and formalized. 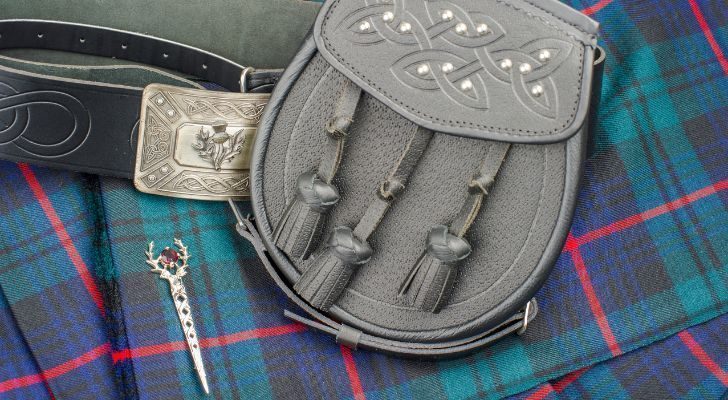 Fashioning the kilt doesn’t just start and end with the kilt itself.

It’s tradition for woolen socks to be worn, which are turned down at the knee.

Additionally, we can’t forget the “sporran,” Gaelic for purse or pouch.

The Sporran hangs down at the waist and is attached to a chain or leather strap.

Other items that can be used to accessorize the kilt include a belt, jacket, kilt pin, brogue shoes, and a white ghillie shirt – a modern informal addition.

The kilt and its use today. 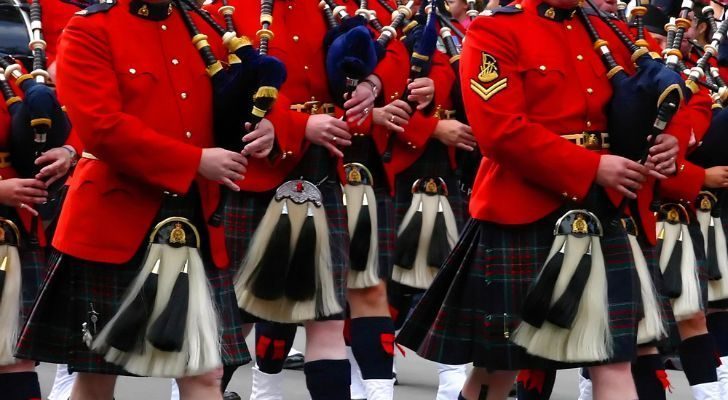 Kilts are still widely used today in Scotland and can even be commonly seen worn by people in cities like Edinburgh.

They are still the national dress of Scotland.

We also now have contemporary kilts, known as “modern kilts” and “utility kilts.”

Contemporary kilts are appearing more frequently lately and are made from a range of fabrics, including leather, denim, and cotton.

The kilt has even made its way from the Highlands to the runway after being presented by prominent fashion designers like Molly Goddard and Virgil Abloh’s Louis Vuitton collab.

This has led to a fashionable trend of ordinary everyday folk like you and me outside of Scotland now wearing them.

Canada has a rich Scottish heritage, and many schools have adopted the use of the kilt for girls.

You may be surprised even to find the kilt worn as everyday wear for some in Nova Scotia!

The kilt has a long, rich, and often bloody history spanning many centuries.

Today, we have only scratched the surface of something that holds such a significant part of Scottish culture.

From its origins solely in the Scottish Highlands, the popularity of the kilt found its way into the Scottish Lowlands. Now, adaptations are worn around the globe.

And to think, in the 18th century, the kilt was almost erased from history for all time. 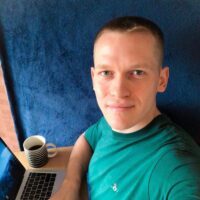